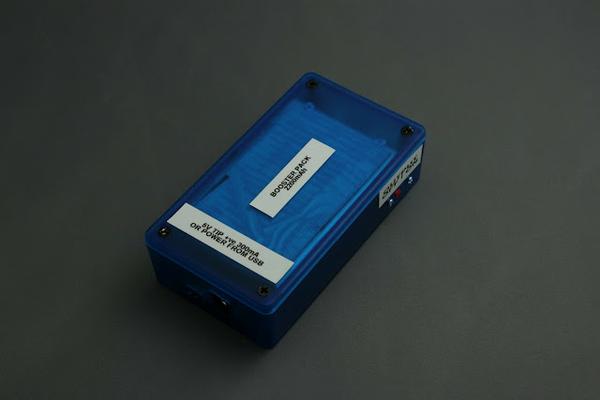 Booster Box Outside: The complete booster box with lots of labels.

My phone, like many modern "smart-phones" has a tendency to go flat when used heavily for internet browsing etc. Unfortunately this is exactly when you aren't near power to charge it up with, so when I found some old iPod replacement batteries in the local Maplin an idea occurred to me. The idea is fairly simple, put a large capacity battery intended as a replacement for the now almost extinct 1st or 2nd gen iPod into a box with a charging socket to charge it, and a power output so it could charge something else.

USB is becoming the standard charging port for lots of things so the choice of output was easy, it had to be 5V DC to drive a USB port. The input could also be USB, or some other plug-in device. I was going to design and build this project from scratch but don't really have time as I wanted it for a camping trip next month, so I bought a couple of modules from SparkFun Electronics while I was ordering parts for another project.

First is the MAX1555 based single cell LiPo charger board they make which has the minimum set of components to get the MAX1555 running with some easy to connect to input/output connectors. Then the output stage which consists of the VPack PCB board which takes in a range of voltages and outputs 5V. This is needed because the single cell voltage for a Lithium Polymer cell is 3.7V so it needs a boost regulator.

Add to these a backplate for a motherboard with a pair of panel mounting USB A sockets (I only used one), a small plastic project box from the local Maplin, an LED, resistor and a switch, and you have a complete product.

Take a look at the pictures and the wiring diagram to see how it all went together. The battery is stuck with gaffa tape to the lid of the box. I bolted the USB A socket into one end of the box with the bolts that had held it onto the PC expansion plate. I also bolted the LiPo charger board down as this has the input connectors on it so needs to be securely attached to the box. Note that the resistor I used with the "output active" LED is 1K, this is a bit high for running an LED off 5V but I wanted to keep the "wasted" current as low as possible, that's just to remind me that I've left the switch on. The switch is there to stop the boost regulator wasting power which is naturally lost in the circuit even when there's no load. Note the switch has been mounted so the top is flush with the side of the case. It's easy to move with a fingernail but hard to knock accidentally.

Thanks to the translucent blue box I used you can see the red "output active" and the green "charging" LEDs through the box without needing to mount them on the outside or use light pipes etc. 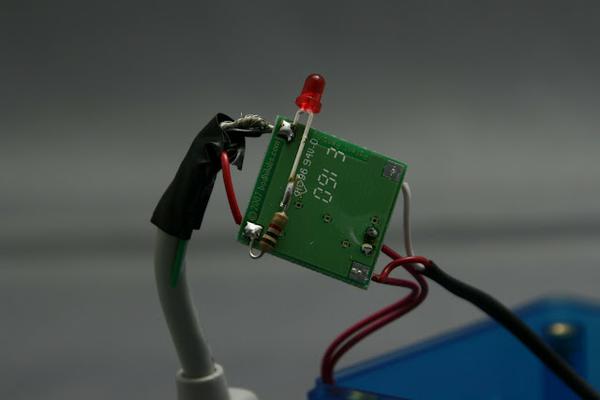 Reminder: I added an LED as a reminder that the output regulator was on. 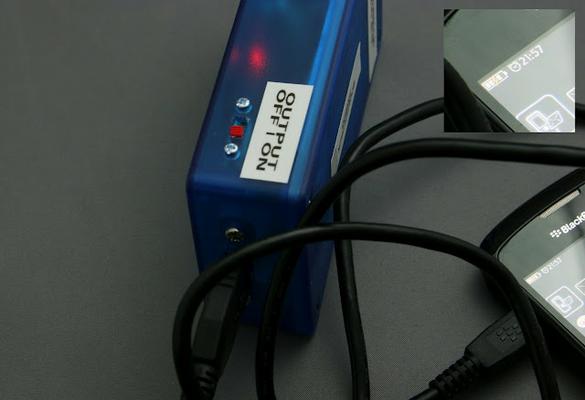 Working: Plugged in and charging my BlackBerry. 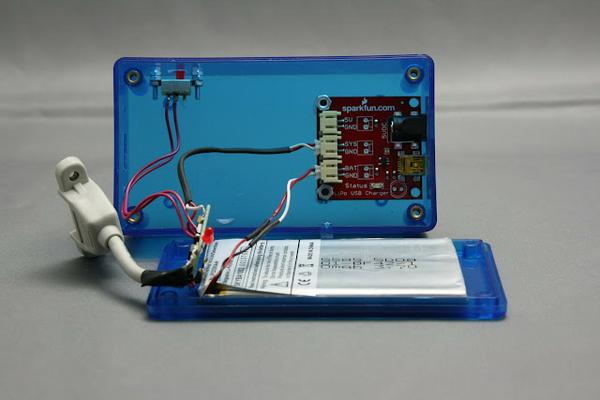 Inside: Inside the booster box, the battery is taped to the lid in the foreground. 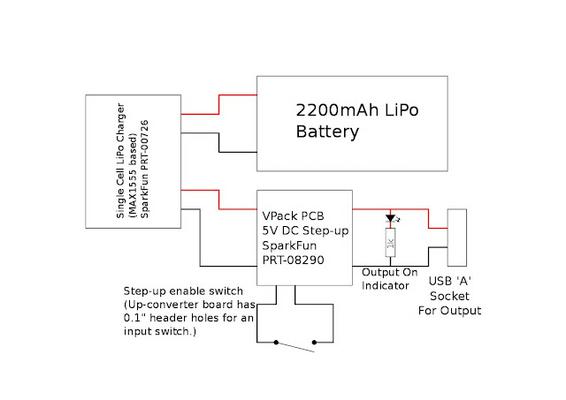 System Diagram: An overview of the connections between the modules I used 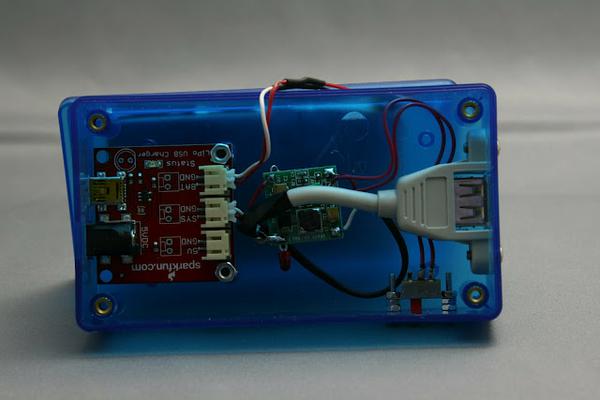 Same thing, I used my old laptop batteries with a car charger and (19-V) laptop charger , a resistor 10-20 ohm then a cutoff board till it reach 13.2 V
its cool and charge 2600mA Li battery several times a cycle :)