I chose to keep the peripheral count low on this system, this was for several reasons;

The basic requirement was for some sort of output display and some sort of alpha-numeric input. So the simplest solution I could think of was a UART, attached to something with a screen and keyboard running a serial terminal. I looked at using the PIC already in the system as a UART as well, but decided that it would be better used as a fast DMA controller with all its pins allocated to that. I had a 6402 UART chip of a similar vintage to the Z80 CPU lying around so that became the core of the UART peripheral.

The MAX232 chip provides the big voltages needed for "true" RS232 signalling. If you've made anything with a serial interface before you'll probably be familiar with this or a similar chip (e.g. the MAX202). There's a bunch of electrolytic caps attached to this to make the suitable voltage step-ups. If you're using a TTL level USB interface e.g. an FT232 based device, you need to skip the level translator, but I'm planning on plugging this into a real serial port on some old hardware I have.

The final peripheral chip is the tri-state buffer. This buffers the status flags from the UART and allows them to drive the data bus when a "status register" is read. You may notice if you are familiar with the 6402 that there is a pin on the chip that forces the status output pins to enter a high impedance state when driven high. This would of course provide the same function without an external chip. However this also forces the Data Ready flag into a high impedance state, and I wanted to make this into an interrupt input to the Z80, which would mean all the status pins would have to be driving continuously, hence the extra buffer. This means that the Data Ready flag, which occurs when a new byte has been received can interrupt the CPU. 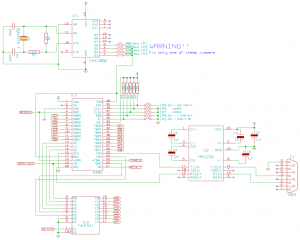 You may notice looking at the circuit diagram that the register names are familiar if you have used the PIC UART before, that's because I have used it a lot and found the 6402 very closely fits the PIC's UART design, and so used those familiar names in my design. I haven't attempted to match the bit pattern in the status register or anything though, so don't assume that they really are the same.

The config bits for the UART (e.g. parity type, number of stop bits etc.) I have set with a row of jumpers wired with pull-up resistors that are shorted to ground if you fit the jumper. I considered making them into another register along with the baud rate select, but the additional chips would have take a lot of space and wiring, and I can't see that the system is likely to need to software configure the serial port when it is the primary input/output device.